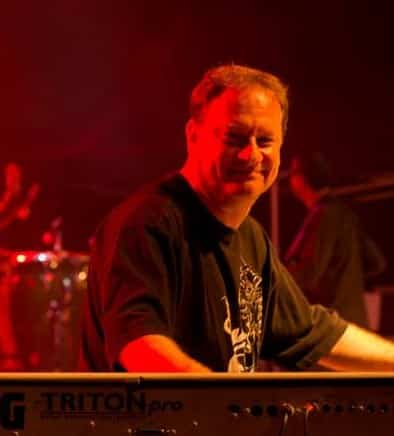 Wally at the Korg Triton with the Gregg Rolie Band

Wally was born and raised in Akron, Ohio, where his love of music was evident early on.

He began playing piano at the age of 6 and, under the tutelage of teachers such as Laura LaGarda, C. Eugene Thrall and Dave Weyrick, he formed the basis for what became his life’s work.

Wally has always been fascinated by jazz and in particular, the music of acclaimed trumpet masters such as Maynard Ferguson and Arturo Sandoval, with whom he eventually worked and earned a Grammy nomination for his stunning arrangement of “Night In Tunisia”, from the Grammy-winning CD, “Dear Diz.”

He moved to Los Angeles in his early 20’s and has been a well respected and highly accomplished member of the LA music scene ever since, having toured and recorded with some of the most well known and successful artists in the world.

Check out the Calendar page for a list of tour dates.